The ‘Tack’ (all items used in the saddling of a horse), is in general similar but, with distinctive differences to tack used in civilian life.

Military tack, always has at least two roles. It must be able to support the duties of the horse and rider whilst operating on a general day to day basis ( in the case of the RMP Mounted this is obviously a Policing role) it also encompasses leisure and/or training riding but, it must also be able to be used with immediate effect in a war time role with just a few additions. 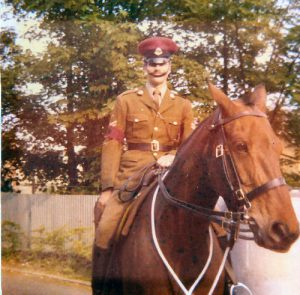 The bridle is the equipment which is placed onto the horses head to which the reins are attached in order to help to control the horse. The standard bridle used for duty and ceremonial purposes was the 1902 Pattern British Army bridle.

Being a military bridle it was designed for dual use in that, it was designed to be broken down into a head collar with only having to remove the ‘Bit’ and reigns. The history of this goes back to the days when cavalry warfare was still an entity for the British Army. In 1902, around the end of the Boer War, a new design of bridle and saddle was issued to all mounted regiments in order to provide more up to date tack for modern warfare as was at that time.

When mounted units would go out into the field of conflict they would be away from normal stabling buildings and lines for quite some time so, the idea was to provide all soldiers with a standard pattern issue for the saddlery which could easily be broken down for use and cleaning and, just as easily and quickly be re-assembled when required.

When out in the field mounted units would need to keep their mounts safe and secure when not riding them. As previously said, the bit and reins would be dropped from the bridle leaving a fully formed head collar with the neck rope attached. The neck rope would be pulled over the horses head and a central picket line would then be fed through the neck ropes to keep the horses secure. 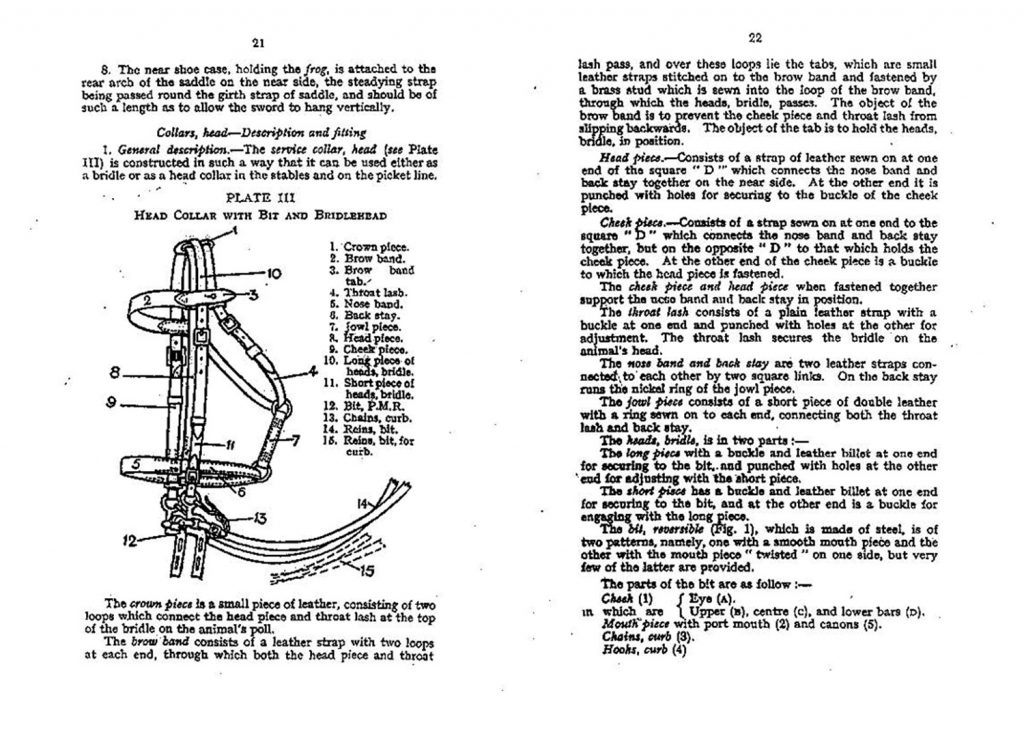 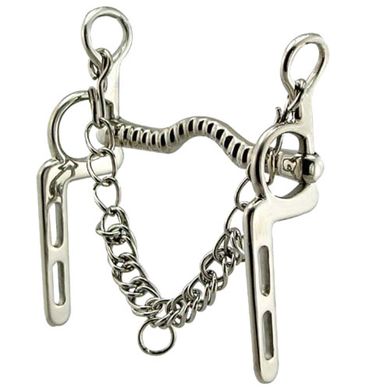 The bit, the military reversible ‘Port Elbow’ or ‘Pelham’ fits into the horses mouth and sits between the ‘Bars’ of the mouth which, are natural gaps between the horses teeth. The bit is used as an aid to guide the direction of the horse and, also to control speed when you wish to slow the horse or, come to a complete stop.

It is made of steel and is one of the heaviest types of bits used on horses. Again, this has a dual role, it can be used as a riding bit or, a driving bit. It has a choice of two fronts, a serrated front (as seen in the picture) or, a smooth front.

It is also equipped with a ‘Curb Chain’ which sits under the horses chin and helps give extra control via the horses mouth. 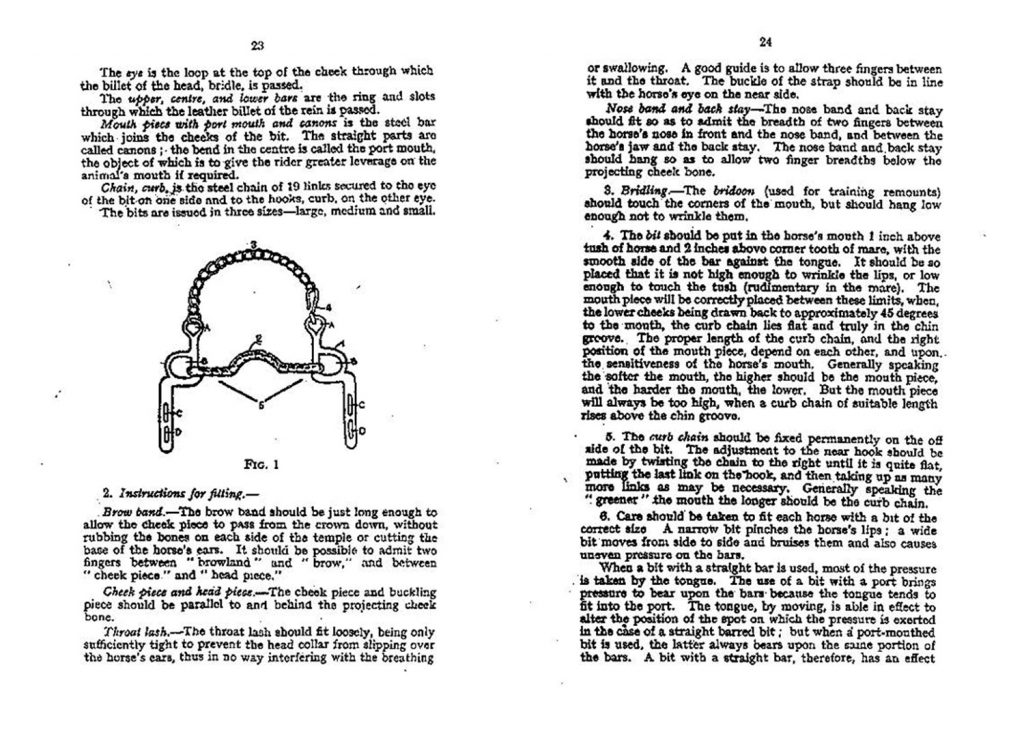 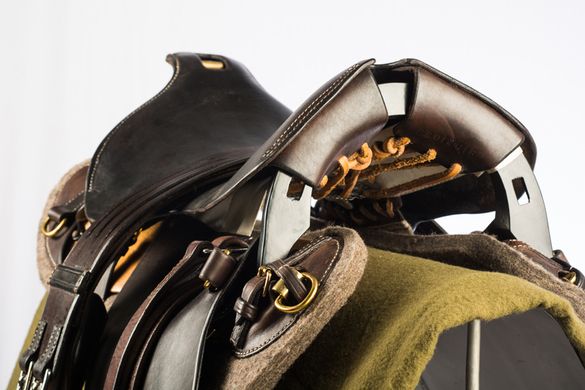 This is the saddle issued to and used by all RMP riders for daily Police Duty use. The pattern of the saddle has not changed since its initial design and implementation within the British Army in 1902.

It covers a multitude of uses in both a peacetime and wartime environment. On any given day it was used by RMP officers for daily Policing duties say in the morning and, after the usual cleaning etc to get it gleaming those same officers would be re-dressed and mounted for a ceremonial duty swapping out the ‘Mob Stick’ for a 1908 pattern British Cavalry sword.

The saddle could if needed be broken down to its framework (made of steel), and used for pack animals in the transportation of supplies usually during a time of war.

As well as a girth (the strap that attaches to both sides of the saddle and runs under the horses chest, the military saddle also comes equipped with a Surcingle. This runs over the top of the saddle, through loops on either side of the girth, and fastens under the horse with a single buckle. It’s a safety girth in practice, just in case the girth snaps during arduous events such as a cavalry charge during a battle. 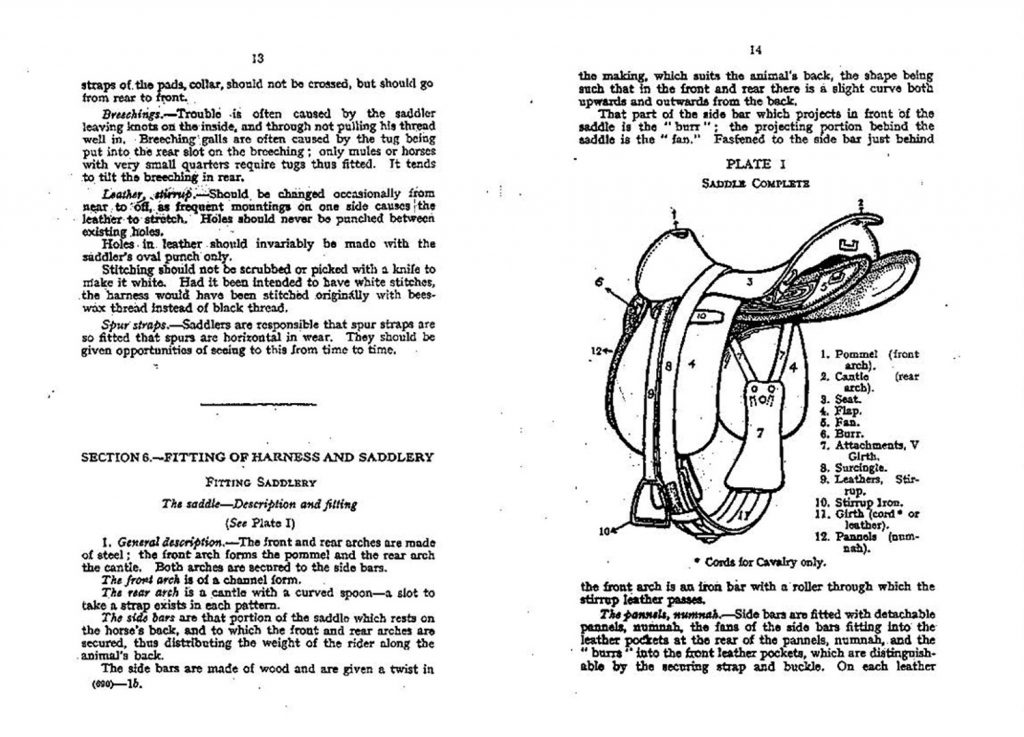 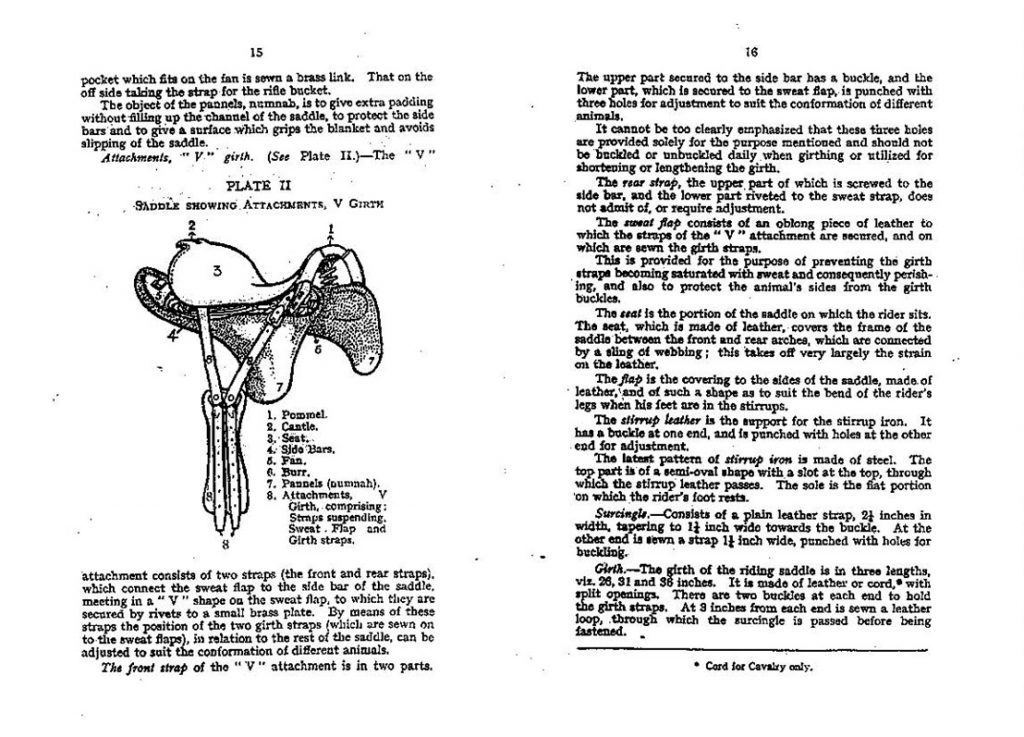 The Shoe Box or Case 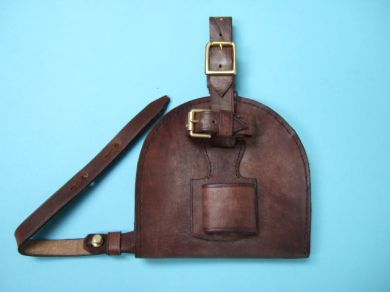 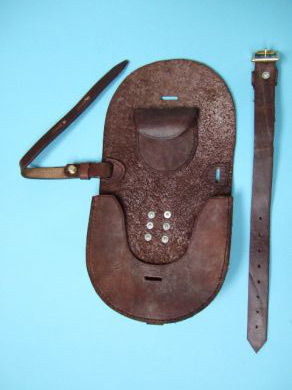 Again, as with all of the other parts of the military tack, this has a duel role. As the title says it is in fact a case for carrying spare horse shoes and nails. It is difficult when on operations to find a local farrier when your horse throws a shoe so, by carrying two spare shoes and nails you have the equipment to immediately make any general shoe repair on the spot.

As you can see from the frontal shot of the case, it has a leather loop in the centre with, a buckled loop above it near the top. When on policing duties the ‘Mob Stick’ (very big truncheon) would be carried here.

When on ceremonial duties, a 1908 pattern British Army Cavalry sword would be carried here.

The case is attached to the saddle frame behind the back of the nearside (left side) of the saddle and, the strap on the left of the case attaches to the girth suspension straps under the saddle flap (as in the images below). 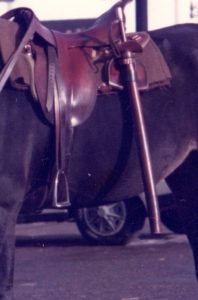 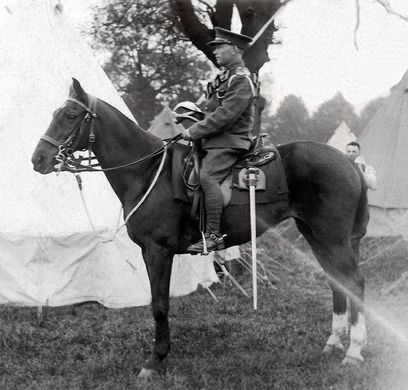 The Saddle Blanket and Ceremonial Cloth 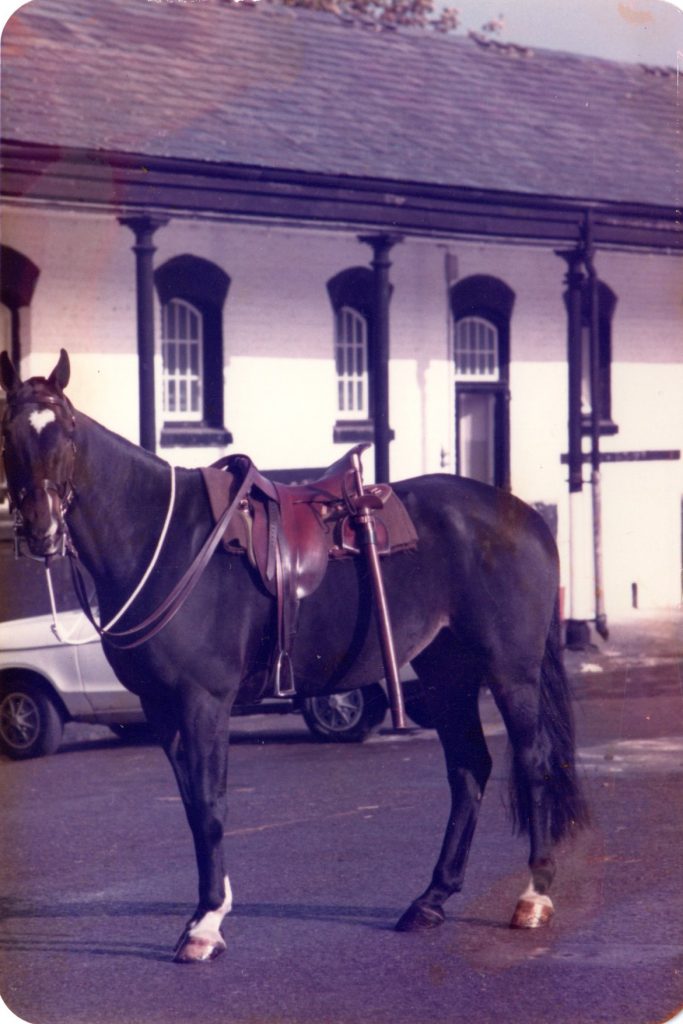 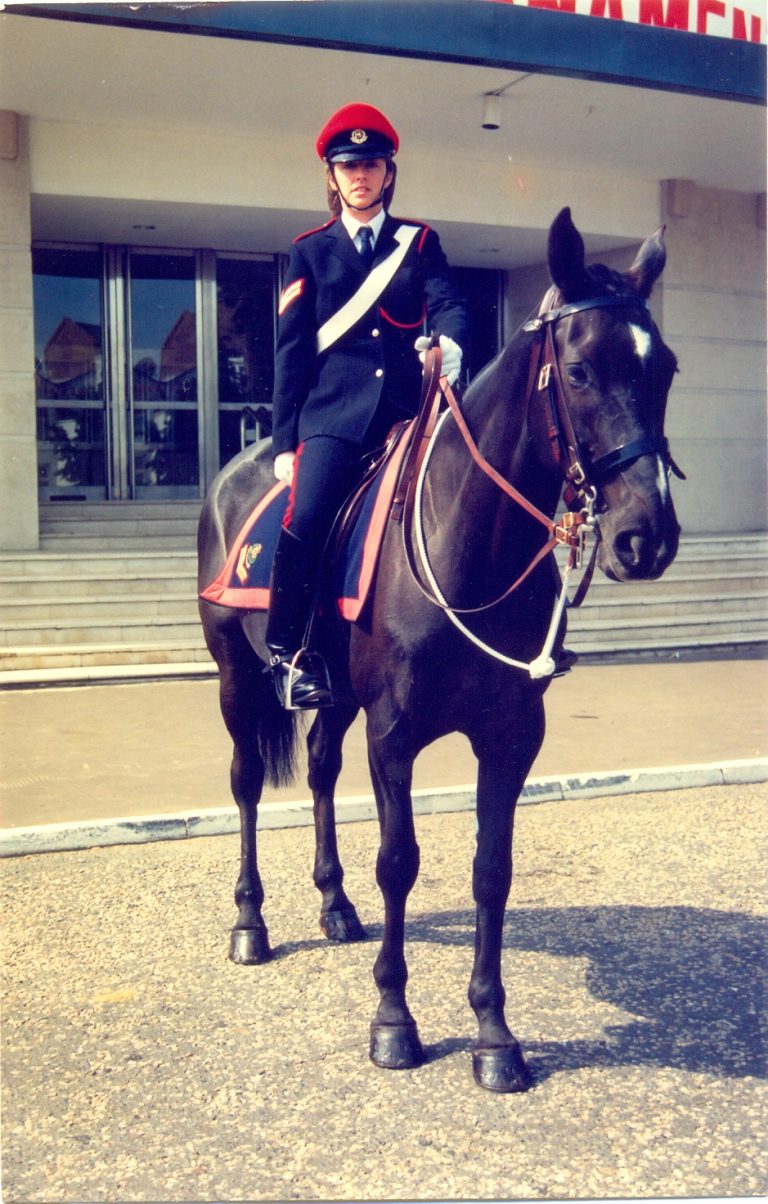 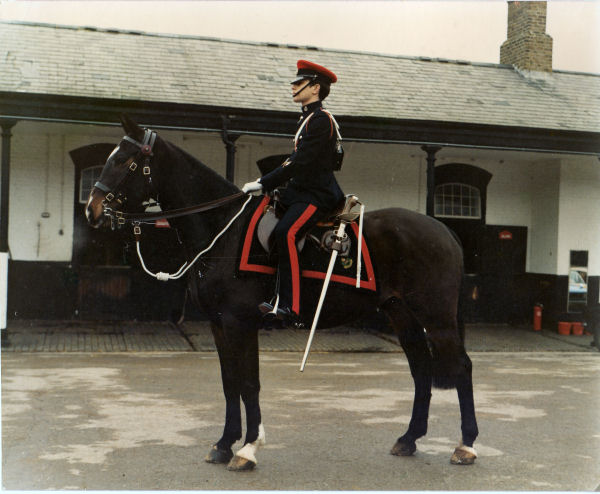 The length of the blanket is folded first then the width giving 2 folded edges and 2 raw edges.

The thick folded edge is placed in front of the folded edges on the off side and the raw edges on the near side and rear of the saddle. The longest side of the blanket goes across the horse.

An extra blanket was issued on operations and both blankets were used as a saddle-cloth.

For ceremonial duties a totally different type of covering is used. This one is much larger and in the colours of the Corps, Blue with a Red pipe around the outer edge of the cloth and, the Corps insignia embroidered in the back corners.

In the last few years before the disbandment of the unit, the riders rank was also embroidered in the same area as the Corps insignia (image on the right). 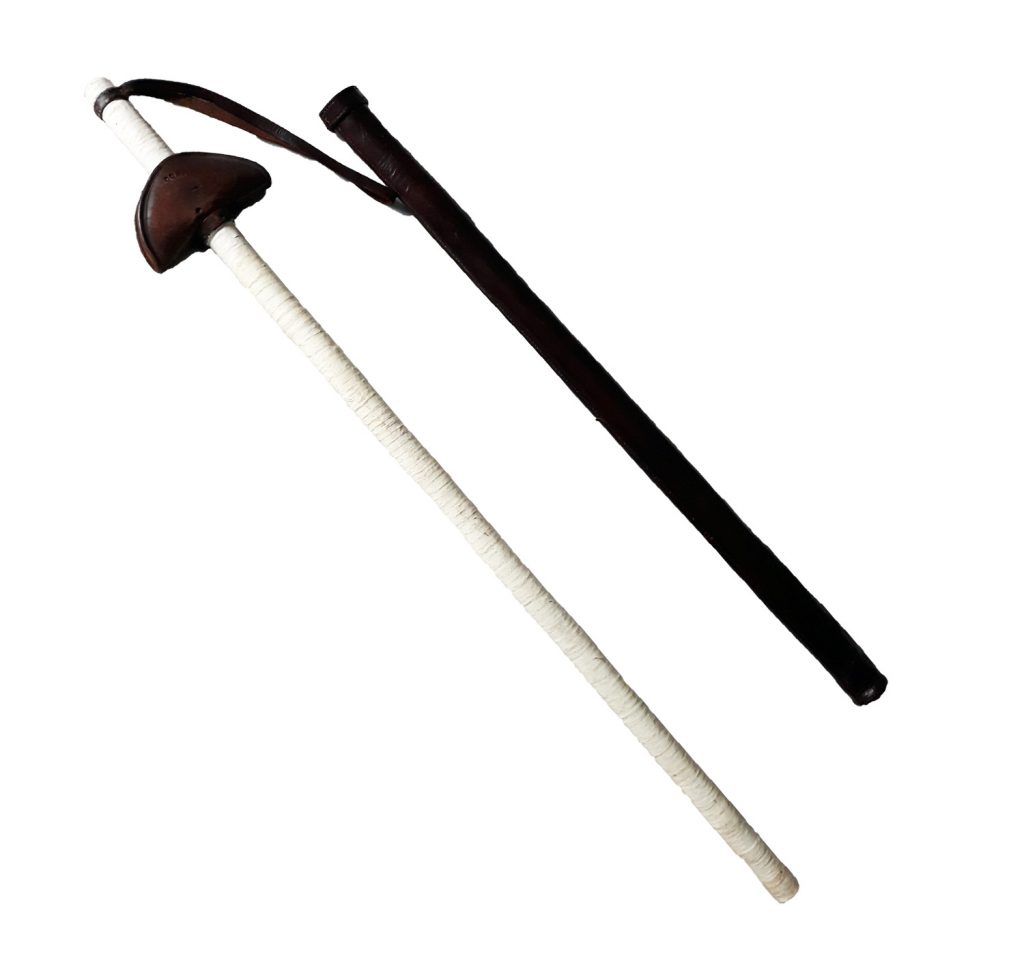 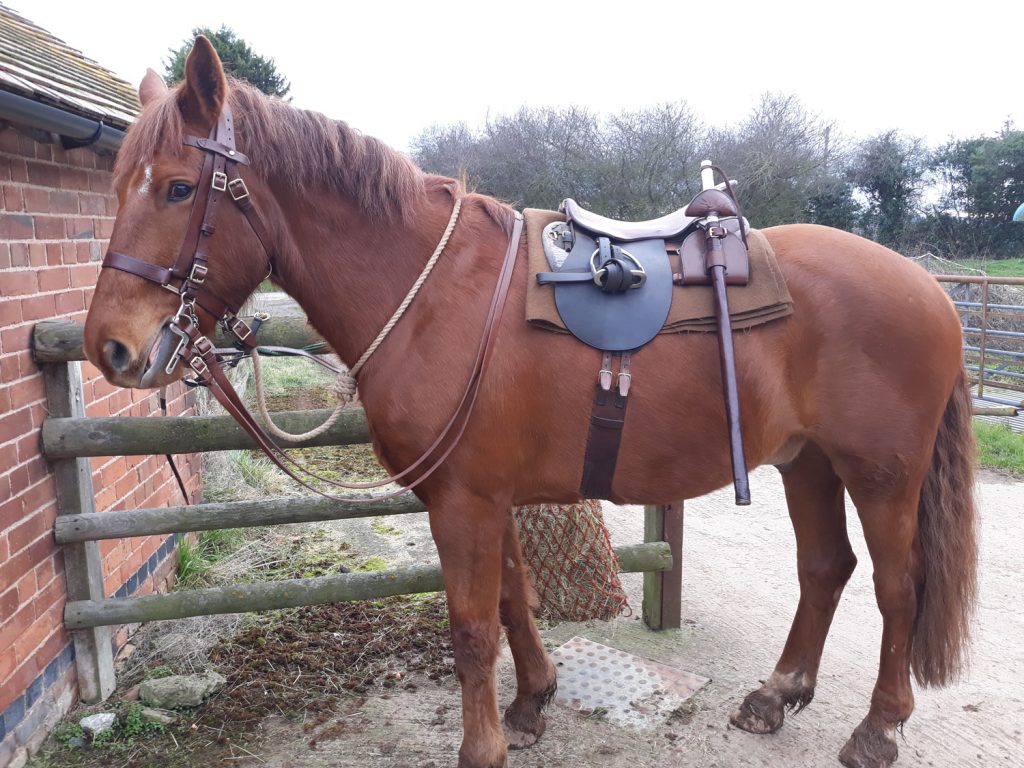 The ‘Mob Stick’ was issued to all mounted police personnel with its primary use being for the protection of the horse in cases where the horse might be placed in danger by the activities of say an unruly mob or riot etc. It was carried at all times when on police duties be that normal patrols or other duties.

It was sited in the shoe box and the scabbard was retained by a strap and buckle at the top of the shoe box.

It was basically the mounted policeman’s truncheon and was to be used for protective purposes only. However, as with all military issued tack it had a multi use role. When engaged in ‘Search & Rescue’ operations such as looking for missing children and adults its use was as a brush beater, its solid construction lent it well to being used for this purpose as a mounted rider was able to easily clear overgrown areas not just to get a horse through but, also to give greater visibility to the rider and any following ground personnel who may be following on.

It was also used for training purposes for rings and pegs before the start of training using a full sized sword (1908 pattern British Troopers Sword). A rider could learn how to advance and collect rings from gallows and attack tent pegs at a modest speed in order to gain the confidence and abilities required to master this skill.

Constructed from Rosewood a very hard Brazilian hard wood with a leather hand guard near the top of the mob stick and a leather thumb thong which the rider would use to give a more secure hold on the mob stick.

When issued the mob stick was just a plain wooden stick with the guard and thong. To add more strength to it, it was then bound with a thick twine with a layer of masking tape layered over that with a final addition of white gloss paint to bond it all together and give a more aesthetic look. The white colour also made it easier to find if operating in the dark.

Later models in the late 80’s and 90’s also included a brass tip and corps badge on the hand guard.

The sword used was the 1908 British military cavalry Troopers sword, this was the last sword that was designed and produced for use in the British Army with the exception of, the 1912 Officers sword.The sword was manufactured by Wilkinson Swords, the same people who make the razor blades.

This particular sword was designed as a thrusting sword not a cutting one, it had no heavily sharpened edge to it.The skewer-like blade had a thick “T” cross-section, much narrower but thicker than a traditional blade design making it far stiffer in the “weak” axis for a given weight so as to resist buckling in the thrust. The blade ended in a sharp “spear” point. The large, sheet steel bowl guard gave considerable protection to the hand.

The rounded rectangular section chequered grip was of a semi-pistol configuration. Although not as extreme as a modern fencing pistol or orthopedic grips, this design caused the blade to naturally align with the arm when the arm was extended, in position for a charge using the point. A thumb stop was indented on top of the grip, just behind the guard.

The large pommel helped to keep the point of balance of the sword close to the guard, balancing the sword for its length.The sword was also used for rings and pegs competitions and shows. The rider would approach a set of gallows at canter/gallop and attempt to retrieve the rings from the gallows and then pick up a tent peg from the ground without losing the rings when bending down for the peg.Another competition involving the sword was know as SLR, short for Sword, Lance & Revolver.

All three weapons were used as previously described above with the exception of the revolver being used to shoot out targets whilst jumping fences.

The length of the blade at just over 35 inches (890 mm) was said to be able to match the reach of the lance with the sword arm fully extended. 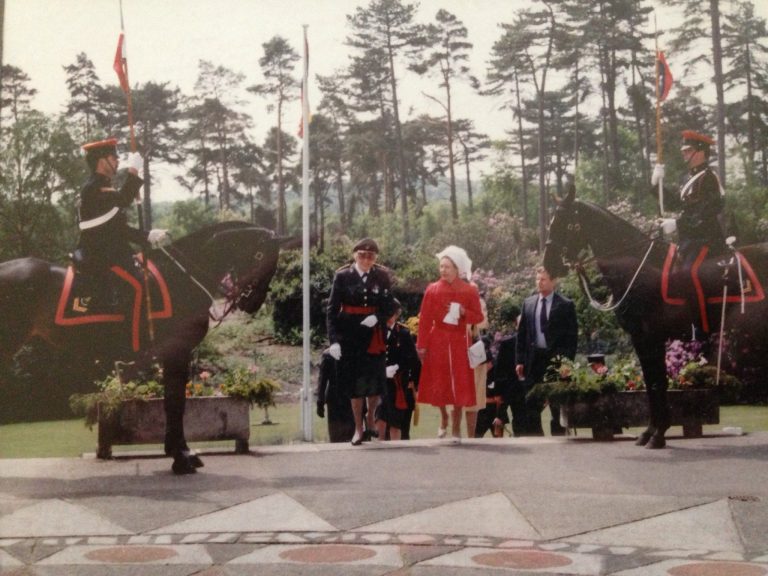 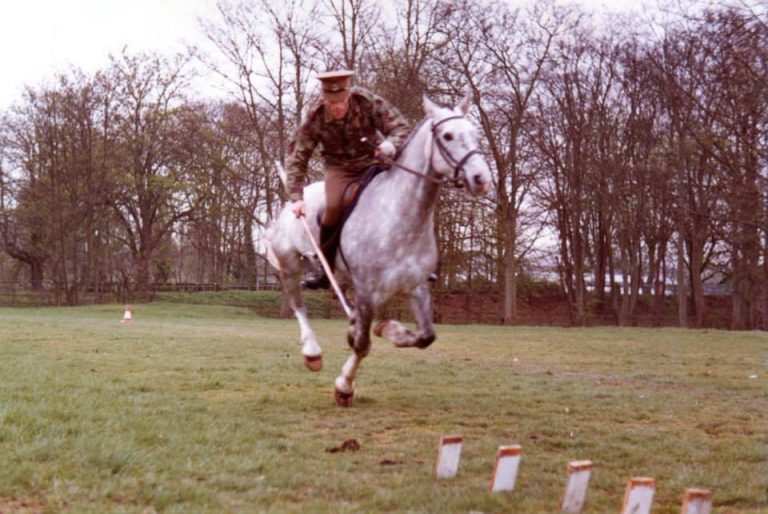